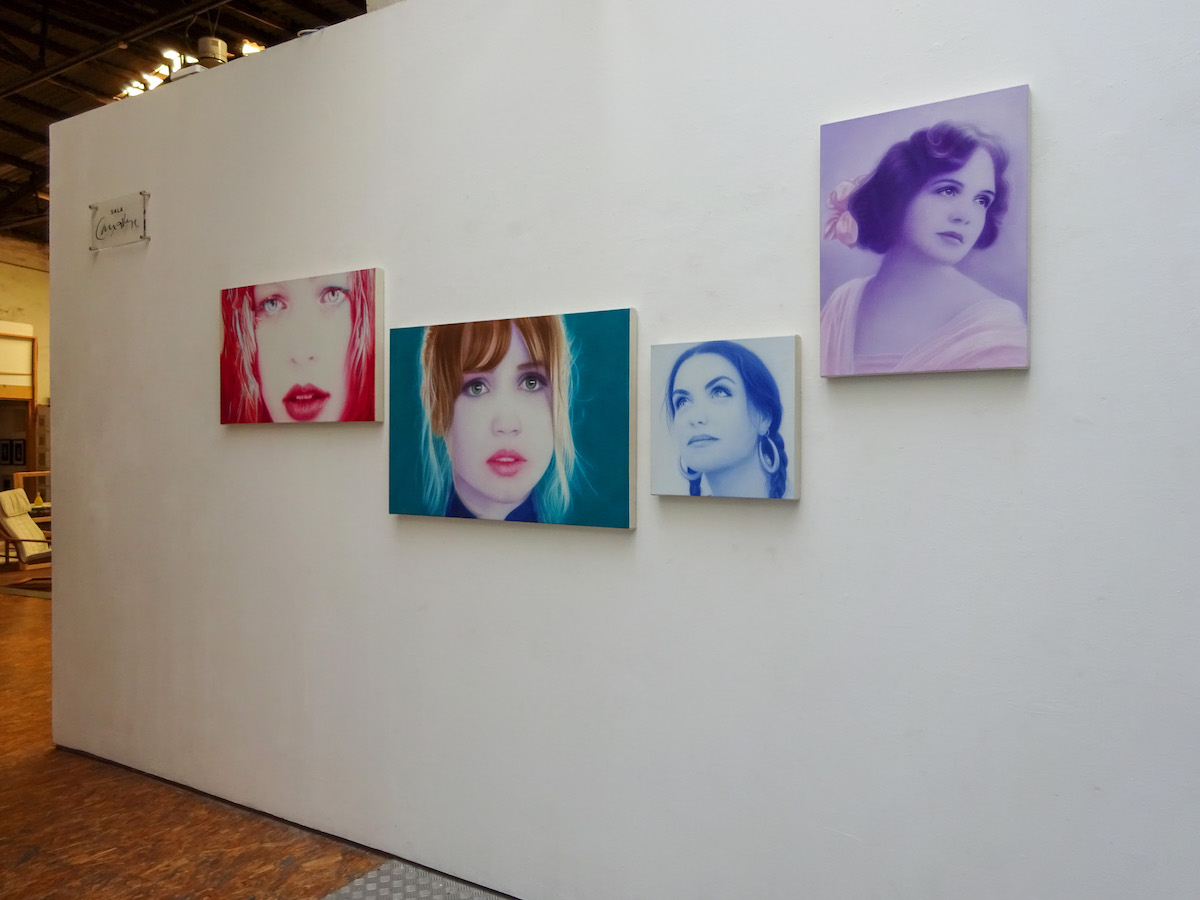 I paint portraits of characters from the world of film, television and music.

I am interested in what a viewer brings with them when looking at a painting of someone they recognise, in terms of memories and references, and how blurred the line between fiction and reality can become.

The subjects I choose are fictional but familiar within contemporary culture. I usually paint female characters in response to the way women have been represented throughout art history, where they have been the passive subject of art. In my paintings, I aim to present them as active protagonists with agency and power.

I also want them to have a timeless, universal quality in the same way as the iconic stars of the silver screen. In his essay 'The Face of Garbo', Roland Barthes sums up what I want to say with these paintings:

"Garbo still belongs to that moment in cinema when capturing the human face still plunged audiences into the deepest ecstasy, when one literally lost oneself in a human image as one would in a philtre, when the face represented a kind of absolute state of the flesh, which could be neither reached nor renounced."

I usually work from photographs taken from the film or television screen. My source material is mediated several times from the original: by photography, projection, photocopy and then painted. The viewer is presented with a split second, transformed and suspended in paint.

Using oil paint like watercolour, I build up the paintings in thin layers of very diluted paint, waiting for each layer to dry before painting again. This process makes the surface of the paintings glow in an imitation of the cinema screen. I use a green skin colour to reference traditional techniques of painting, where green was used as under-painting to give luminosity to the surface colour. I also often use a blue skin tone to suggest the glow of the screen on a viewer.

The following text was written by Laura Oldfield Ford:

"To visit the parade of ghostly perfection in Josie McCoy's exquisitely rendered paintings is to witness the markers of an interior landscape. We are hostages to these faces for they cannot be erased from the minds eye, to confront them is to experience a sense of unheimlich, the uncanny, I may not be able to name them but I carry the index of their image with me.

"The faces of the subjects, almost always women, are the smoothed over and unblemished masks of the global videodrome. There is something of the chimera about them, a haunting. They loom up from the canvas, floating glassy eyed, impervious to the world they cast their gaze upon. These are the blank stares of the undead, self renewing, waiting for the fantasies of the viewer to be projected onto them. They are the archetypes of female beauty in a shimmering heterotopia, they persist as a tide of eternal disappointment in what we are and what we aspire to be.

"The seamlessness inherent in these paintings imbues them with a dream like, almost Lynchian quality. What we are being given is a sequence of glimpses, the imagination is left to construct the context. We are left to draw on mediated references by mining a store far more extensive than we might have imagined. These images seem familiar precisely because they have been settled within our psyches for so long. The spectacle does not carry us along, we carry it, it becomes suffused in our own subjectivity until we cannot disown it. It is no longer a glowing phantasmagoria that bewitches us but something deeply implanted and internalized, an inescapable part of ourselves."